Bodh Gaya bombings: Why were so many warnings ignored?

This we already know: behind the Bodh Gaya bombings lies the same old, depressing story of incompetence and apathy.

India’s police and intelligence services knew there were plots to attack the temple. Indeed, jihadists quite publicly announced they intended to attack Buddhist targets. The police repeatedly warned that security at the temple wasn’t good enough.

From January, government sources have told Firstpost, the Intelligence Bureau had issued several warnings pointing to heightened risks to Buddhist religious targets in India, as a consequence of anti-Muslim violence in Myanmar.

In January, the Delhi Police said at a press conference that arrested Indian Mujahideen operatives confessed that they had conducted reconnaissance at Bodh in preparation for an attack. The information that led to those arrests came from the Intelligence Bureau, which had penetrated a cell that was planning attacks in multiple locations, including Hyderabad, where a similar bombing took place earlier this year. 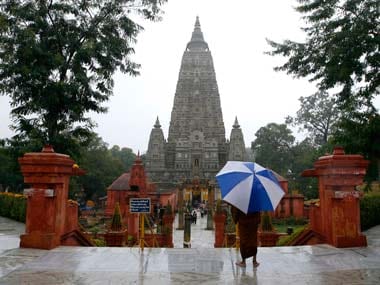 The Mahabodhi temple was targeted with eight blasts: Reuters

Neither this, nor subsequent intelligence warnings on the threat to Bodh Gaya, named specific cells or individuals. They did, however, call for security to be stepped-up.

Less than a week ago, though, deputy inspector-general of police Nayyar Hasnain Khan told the Bodh Gaya temple management that there were serious flaws in its security management. He pointed out that the staff hired by management had hired didn’t know how to use door-frame metal detectors, no-one was monitoring closed-circuit television cameras in real time, and footage wasn’t retained.

It’s too early to come to conclusions on who the perpetrators might have been—unlike Internet conspiracy theorists, who’ll be blaming everyone from Islamists to the intelligence services themselves in coming hours. Criminal investigators need evidence, not guesses about motives. There are some pieces of evidence already available, though.

The first impressions of investigators at the site, according to police sources, is that the bombs were likely made from commercially-available substances like ammonium nitrate or potassium permanganate. Though such substantances aren’t as lethal military-grade explosives as PETN or Semtex, they are widely available, and can be made into widely used by a range of terrorist organisations across the world. It is possible, a forensic expert tells Firstpost, that humidity or manufacturing defects may have mitigated the explosive force of the IEDs—this is exactly what happened with similar devices placed in Mumbai’s Crawford Road last year.

Experts from the National Investigations Agency and National Security Guard will study the bomb residue, but it could be some days before results are available.

Jihadist groups have been threatening violence against Buddhist targets for over a year now. In July 2012, one year ago, the al-Qaeda linked Tehreek-e-Taliban Pakistan threatened to carry out attacks against Buddhists in retaliation for the communal violence in Myanmar. In June, this year Lashkar-e-Taiba chief Hafiz Muhammad Saeed publicly charged India with helping Burma “wipe out [the] Muslim population”.

Indian government is working in cahoots with Burmese government to wipe out Muslim population of #Burma.

It is also an obligation on the whole Muslim ummah to defend the rights and honor of #Rohingya Muslims in #Burma.

The group that carried out the attack likely involved multiple individuals, with a relatively high degree of coordination and skill. Four bombs went off Mahabodhi Temple complex at about 5:40 am, and three at the Terega Monastery. The eighth blast took place near the famous 80-foot statue of Lord Buddha. It would, obviously, have taken more than one individual to carry the bombs in—perhaps concealed in boxes looking like temple offerings, or lunch-packs. They’d need timers set for synchronous explosions—either clocks, or a mobile-phone activated system.

Individuals from Bihar’s Darbhanga area have been charged with a role in jihadist operations in India—among them Danish Ahmad, the three alleged Indian Mujahideen operative who provided information on the Bodh Gaya reconaissance. Fugitive Indian Mujahideen commander Yasin Zarar Siddibapa is alleged to have sheltered in Darbhanga.