26/11: Attack that shook Mumbai's faith in its own infallibility

The city’s fabled spirit was badly shaken but not broken.

But many other things broke on 26/11 — Mumbai’s faith in its own infallibility, its unshakable confidence in its ability to manage itself, the citizens' trust in people who run the city and the lives of the family members of the 166 who died.

The city is no stranger to such deaths — close to 260 people were killed in 1993 when serial bombings rocked the city; 184 were dead when bombs went off on suburban trains in 2006; and there were several casualties in similar blasts in the interregnum. It had learnt to live with such mishaps. 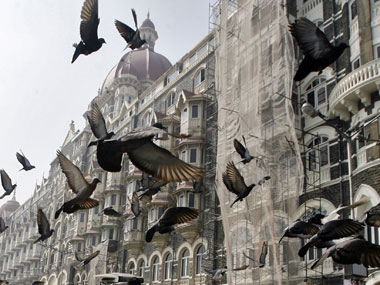 The lingering memory of that long evening would be the single photograph of an armed young man and his cohort under the foot overbridge outside Chhatrapati Shivaji Terminus. Reuters

It was a new experience. As millions sat glued to their television sets in the city, watching with horror the audacity of the as yet unknown enemy, the feeling was one of loss. It was difficult to fathom that feeling then but it was clear that something very sacred to the city had been violated. Its citizens had lost something precious.

Was it pride? Was it the sense of self-respect? Was it self-belief? Or was it all of these together? We will never know for sure. But the shared sense of loss was unique.

The lingering memory of that long evening would be the single photograph of an armed young man and his cohort under the foot overbridge outside Chhatrapati Shivaji Terminus. Just before they were caught on camera, they had caused a carnage at the station, shooting indiscriminately at unsuspecting passengers and killing 58 of them.

Mumbai prayed for the victims here. They were ordinary people like any of us, waiting for a train or waiting to pick up a relative from the station. We could have been in their place had it been some other day. The city prayed some more as the intruders went on a killing spree in Chabad House, near Cama Hospital, at Cafe Leopold and elsewhere. The siege of the Taj by terrorists was  a made-for-the media event but the real story of the attack was the killing of the ordinary folk who make the city what it is: a resilient city.

In its worst moment the city produced its heroes. The heart goes out for Tukaram Omble —now a martyr. Omble, an assistant sub-inspector of police, responded to the call of duty in a way that was as exemplary as heart-warming. Armed with just a stick, he led the charge of a police team at Chowpatty on Ajmal Kasab, the sole terrorist captured in the attack.

He held on to  Kasab's gun despite being fired at from an AK-47 by the terrorist. He lost consciousness in the process but did not allow Kasab to break free, which enabled other officers to get a hold of him. More than 20 bullets were recovered from Ombale's body, medical reports would say later. How could a city that produced such men go so horribly wrong? How could 10 men from nowhere leave a city of 18 million so miserable? We will never get the answer.

The whole attack was the product of a huge conspiracy, the city was told latter. It does not make sense to get into that now. The same story has been repeated so many times that we have lost interest. The villains are familiar as are the victims. But the whole space between the two is full of suspects and suspicions.

They are still around — some still run the show. We are still not sure they are good enough to stop another attack. They keep making noises to soothe our frayed nerves and injured egos. But we know nice words are not enough. We need more. The incident broke so many things. We want all that repaired. Admitted, it’s difficult. But please nobody fool us with platitudes.

This day, three years earlier, the city lost something very precious. It’s one of those intangibles that constitutes the spirit of Mumbai. One hopes there’s no recurrence of 26/11.