Fan has been produced by Yash Raj Films, and is Shah Rukh Khan's first release of 2016.

Stay tuned to watch us live at Chandan cinemas, Juhu with real-life fan reactions to Fan.

Tell us what you think!

Film critics are tweeting their responses:

Maneesh Sharma, director of Fan, in an interview with India Today, has said that Shah Rukh Khan is a director's dream:

"He has exactly the same behaviour," says Sharma of SRK then and now. "There was not the slightest intimidation [in directing him]. And all credit goes to him. He is submissive to the director's vision. There is no other way for him."

That's all for today guys! Happy #Fan day to you -- and look out for our review from Anna Vetticad soon. 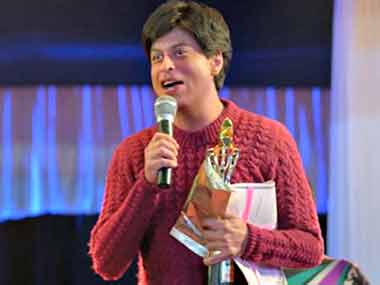 We will be getting audiences very shortly. Watch this space!

Half way through the movie, and all i can say is the only person who can act better than SRK is SRK himself. #FirstDayFANShow @FanTheFilm

Audiences not interested in lengthy chases between Aryan and Gaurav. Clearly Shah Rukh Khan trumps all.

#SRKvsSRK On #FANDay audiences have preferred Gaurav over Aryan with 59 % votes in our poll. #FirstDayFANShow Who did you prefer?

Stay tuned to watch us live at Chandan cinemas, Juhu with real-life fan reactions to Fan.

I cannot even express how amazing @iamsrk is as Gaurav Chandna in #FAN . What a superbly nuanced & complex act. Kudos Maneesh Sharma !

Aamir Khan is a star. Salman Khan is a superstar. @iamsrk is an EMOTION.#FirstDayFANShow

For an actor who has enthralled audiences with his romantic hero image, the premise of Shah Rukh Khan's upcoming film Fan might seem a tad narcissistic.

Fan starts with the story of an usual boy named Gaurav who is based in Delhi, who is a huge fan of superstar Aryan Khanna (both characters played by Shah Rukh Khan). The film picks up pace as Gaurav embarks on a journey from Delhi to Mumbai to to wish Aryan on his birthday. Incidentally, Gaurav bears a striking resemblance to Aryan.

However, very soon things start to go a bit haywire and not as per plan, and Gaurav's passion for his favourite actor turns into an obsession that borders on dangerous. Fan has been produced at a budget of Rs 85 crore by Yash Raj Films, and is Shah Rukh Khan's first release of 2016. The film has been several years in the making and has been delayed twice due to the heavy VFX in the film (in making Shah Rukh Khan look like two different people) and because of SRK's knee injuries that forced him to take breaks in the middle.

In fact the idea of the film came to veteran filmmaker Yash Raj Films close to 8 years ago. Three-time Academy Award winning make-up artist Greg Cannom had been roped in to put together Gaurav and Aryan's look in Fan. Cannom has films such as The Curious Case Of Benjamin Button, Van Helsing, and A Beautiful Mind to his credit. He also worked on Rishi Kapoor's look in Kapoor & Sons.

Fan also stars Waluscha D'Souza, Shriya Pilgaonkar and Sayani Gupta. Shah Rukh Khan has always been extremely invested in the marketing of his films, and Fan was no different. The promotions kick started many months ago when SRK unveiled a huge mural of Fan outside his bungalow Mannat. The Fan logo is made up of a collage of pictures of all SRK fans. The Fan anthem, composed by Vishal-Shekhar and written by Varun Grover, has been released in 8 different languages.

The film has been shot in Mumbai, Croatia, London and Delhi. Yash Rak Films has been extremely secretive about the plot and before Shah Rukh Khan's look was revealed to the public, it was kept completely under wraps. Infact nobody, including SRK himself, was allowed to use phones on the shoot.

Shah Rukh Khan had to go through 3D scanning to play a younger boy, and his avatar as Gaurav has also been placed at London's Madam Tussauds museum. According to this Business Standard report, Fan has been released in 3000 screens across India and 700 screens abroad. In order to make profits, Fan will have to rake in over 200 crore at the box office.