Where the two PILs targeting political parties have reached

Background:  As I noted on 14 January, there are two important PILs being looked into by the Delhi HC and the SC respectively. To recap from the post titled Two PILs that you should keep your eye on:

India is witnessing an increasing number of instances wherein active citizens are using Public Interest Litigations [PIL] to take on the political class. This strikes one to be slightly more effective than games such as let-us-trade-allegations and holler-hoot-shoot-and-scoot, played in TV studios, wherein sometimes the panelists think nothing of squandering away their precious ignorance much to the collective amusement of the viewers.

This write-up will focus on 2 such cases that could have far-reaching implications on the quality of politics as well as politicians. The two PILs revolve around The Representation of the People Act and are good news for the citizens, irrespective of how things pan out on this front, or which political party one supports. After all, the problem of corrupt and criminal MPs & MLAs, as also of the ills the current political funding mechanisms lead to, is not restricted to only one political outfit. The sooner the cesspool is cleaned up a bit - Sisyphean as the task appears - the better it will be for the country. 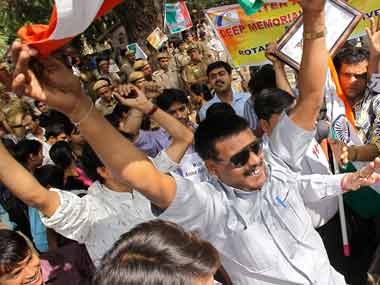 Powered by money or ideals? Reuters

On 4 February, 2013 one of these two PILs came up for the second hearing. In the first hearing on 10 January, a bench of Delhi High Court heard the arguments that the INC and BJP have violated the Representation of People’s Act (RPA) 1951 and Foreign Contribution (Regulation) Act (FCRA) by taking donations from government companies and foreign sources, which is prohibited under both the legislations.

The Home Ministry ducks: As per the documents that I have examined and the ADR press note [click here], the EC had first written to the MHA asking for clarifications on the issue of irregularities in political funding way back on 28 September, 2012. Dazzling silence followed. Subsequently, the EC shot off another letter to the MHA on 11 January, 2013. With the heat being turned on, the MHA finally confessed in court on 4 February that it has “received the complaints from the ECI and that they have called upon the Congress and BJP to furnish their responses in this regard”. This, as per the petitioners, is a classic case of conflict of interest which can only be resolved by investigations conducted by an independent authority”.

As things stand today, the bench has issued formal notices to the Union of India, the EC, the INC and the BJP and asked them to reply within 3 weeks. Tarikh pey tarikh?

Election Commission shrugs: The timid response of the EC is perhaps a bit more revealing about how the system has been purportedly gamed. Read on:

ECI has responded in its submission to the Delhi HC that as per existing provisions of funding of Section 29B of the RP Act 1951, no political party shall be eligible to accept any contribution from any foreign source defined under clause (e) of Section 2 of the FCRA. It has also stated that the commission (EC) is not an investigation agency and it cannot detect from the contribution reports (that the political parties have to submit under rule 85B of the Conduct of Election Rules, 1961 in order to secure the tax relief) of political parties as to which sources of funds belong to foreign companies or their Indian subsidiaries.

EC has further stated that the onus of investigating and taking punitive action against any offence committed by political parties or the PSUs lies with the Government of India!

So now, one of the accused will oversee the investigations - if any - once again? A classic case, if ever there was one, of unrestrained omnipotence in the hands of the political establishment being the devil’s strumpet?

Afterthought: In the calm centre of the maelstrom of outrage, anger, helplessness and disillusionment, a few people are taking on Goliath. Using constitutional and legal means. One can only hope that the government will not resort to sordid machiavellianism to stifle such constructive challenges to their authority. After all, it is for better governance and superior transparency that these people are fighting for. I, for one, will keenly follow the developments on this case…and updates will follow as events warrant.

You can write in to me [shining.path.notperu@gmail.com] to request for the relevant documents pertaining to this case.