With the way the current Indian cricket team is playing against England, I think it is safe to say that we are just a defeat away from effigy burning.

We have all seen images of a bunch of guys, often in their twenties, standing on a street corner burning posters and effigies of their “favorite” cricketers. Most of them are consumed by rage while a few look shattered and deeply disappointed at being let down. Sometimes these men can also get very violent. They are what one would refer to as the sports fanatic. 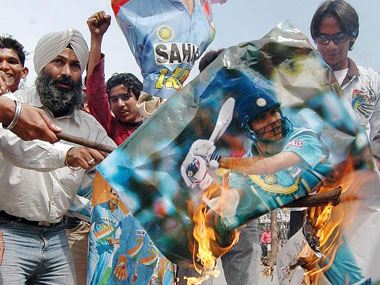 Actually they are not wrong in calling themselves “true fans”. The word fan was derived from the word fanatic which finds its origins in the Latin word fanaticus, meaning “insanely but divinely inspired.” The sports fan is emotional, passionate and irrational. A fan watches a sporting event knowing that there is chance they will be extremely unhappy with the final outcome, even though it will have zero impact on the trajectory of their lives (any gambling aside).

So what is it about sports that turn an average normal person into a complete irrational fool? Professor Daniel Wann, a psychologist at Murray State University in Kentucky, states that there are eight major motives for becoming a sports fan: eustress (postitive stress), escape, entertainment, economic, aesthetic, group affiliation, self-esteem, and family needs.

However, I am convinced that people fall in love with sports because it simply fulfills a basic human need - it provides a sense of belonging and acceptance.

It is this sense of belonging or acceptance that ignites the sports fanatic’s intense emotions. In today’s society the athlete represents the warrior who is fighting for the honor of his tribe. When the athlete performs well he is put on a pedestal and worshipped but when he fails to perform then “the tribe must remind him of his purpose – the reason for his existence.”The sport fanatic considers it his right to voice his dissatisfaction.

As New York Times Magazine’s cultural editor Adam Sternbergh states “sports are never guaranteed to end happily. In fact for some fans, most games end in a highly unsatisfying way. As a fan, you will feel actual joy or actual pain in relation to events that really don’t affect your life at all. It matters, deeply, and yet it doesn’t matter at all. It’s heartbreak.”

Heartbreak all right, but why do these seemly normal people turn into violent angry fanatics? Most psychologists point to four key reasons.

Disinhibition: Cheering for your favorite sports team helps you break the shackles of what is called “normal socially accepted behavior.” Your immediate emotions take over, you are in the moment and so things like self monitoring reduce drastically. This makes it acceptable to hurl abuses, pass derogatory comments, physically assault the rival team supporters and in some extreme cases even harm your “favorite athlete” who let you down. A complete collapse of social inhibitions.

Deindividuation: Groups provide a sense of anonymity. Individual accountability reduces and ones morals tend to take a back seat. The line between right and wrong can get blurred as the tendency of “everyone is doing it so let me too” takes over. This leads to hooliganism both in the on line and off line world

Ingroup-outgroup bias: Stems from the belief that one’s group is superior to the others. This creates strong “fandoms” where supporters of one team tend to despise the supporters of the other.

Cognitive bias: At a simple level it refers to reinforcing my beliefs by only accepting moments that confirm my belief and rejecting those that point to the contrary. This is what makes fans question every referee call against their team, blame the rival team of cheating or justify their favorite team’s horrid performance on some absurd superstition such as “But I did not sit on my spot on my couch therefore my team lost”

Thus, the sports fanatic is wired in such a way that as long as sports exist there will be fanatics. It is futile to try and curb them. Yes, outright violence is unacceptable but if painting their faces and chanting their team’s anthem provides them with an outlet for pent up emotions, so be it. After all it is these fans that pay not to just attend a sports event but to be a part of it. They are the oxygen that gives life to professional sports.