At the Mayor’s Cup International Open Chess championship in June this year, a 14-year-old boy with a tilak on his forehead possessed the kind of energy that did not allow him to sit still. He kept running around the NSCI stadium hall watching the positions on various boards while sneaking a peek at what was happening on his own table. Even when he sat thinking of his moves, he could not remain still and looked keen to bolt the minute he got a chance.

Back then it was easy to mistake Aravindh Chithambaram as one among the many 13-14 year olds who were playing in the tournament for exposure and experience, though he was already being talked about highly in chess circles. 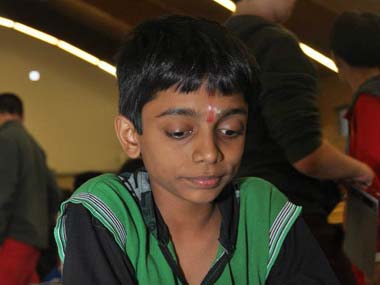 Aravindh Chithambaram thinking about his next move. Firstpost

While the energy levels remain the same, the boy from Madurai can no longer be mistaken for just another kid trying his hand at chess following his victory at the Chennai Grandmaster International Open Chess tournament last week, a few kilometres away from the venue of the world championship battle between Viswanathan Anand and eventual champion Magnus Carlsen in Chennai.

The performance was all the more special because the boy with an ELO rating of 2335, came up with a performance equivalent to 2728 rating points and defeated four GMs and two IMs on his way to score nine points of a possible 11 to clinch his first international norm tournament title.

“He is extremely quick at calculations and just like Carlsen he relies heavily on his end game skills to win matches,” says GM RB Ramesh, who has been coaching Aravindh for the last two years at his Chess Gurukul Academy in Chennai.

Quick calculations are a habit Aravindh developed while learning the ropes of the game from his maternal grandfather when he was seven. “He would always try to find ways to get out of the house and playing cricket with other boys,” says his mother Deivanai. “So my father introduced him to chess to try and keep him still in one position.”

He took to the sport instantly but always used to be in a hurry to finish the game and get out. It was simple for him to do that. But making a career in chess wasn’t.

Aravindh lost his father when he was three years old and his mother worked as an LIC Agent to run the household. Though Aravindh was showing good results in the national age group tournaments under the tutelage of local coaches in Madurai, it was important for him to get better coaching and exposure. That is when Ramesh came calling and the family shifted to Chennai.

While Ramesh coaches Aravindh for free, the Velammal High School does not charge Aravindh any tuition fees and Oil and Natural Gas Corporation (ONGC) has extended him a scholarship. This has enabled Aravindh to concentrate on his chess and he already has National U-11, U-13 and U-19 titles to show for his effort, apart from the silver medal in the U-14 category of the 2012 World Youth Chess Championship in Slovenia.

However, Ramesh believes that his journey has just begun. “To succeed in international sport, you just can’t rely on talent. He undoubtedly has the talent, but it needs to be supported with proper training and exposure.”

But aren’t there enough international norm tournaments in India now?

“There are,” admits Ramesh. “But if you look at the ratings of Indian players you will know that there are many talented players with not so good rating points. That is why most top players don’t play here and that is hurting his chances in becoming a GM soon. If he gets to play abroad, I have no doubt that he can become a GM in six months.”

Aravindh has already grabbed one GM norm in Chennai and the 80 rating points he gained have taken him past the 2400 rating mark. There are still two more norms and about 85 more points to achieve before he can claim the GM title.

Given Aravindh’s reluctance to stay still, he will want to achieve that quickly and move on to bigger things.