Assam lost at least 90 of its 2500-odd rhinos to poachers since 2008, 34 of those only in 2013. Mumbai's Aarey colony lost three children and two women to leopards in the last two years even though the forest department has trapped two dozen leopards in and around the colony since 2004. 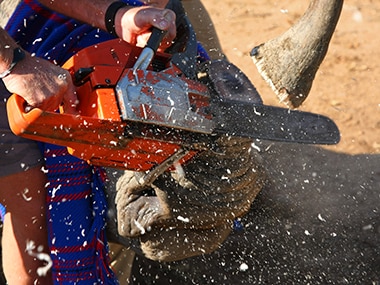 So how do we respond to what primarily have been gross administrative failures?

Assam forest minister and environment minister Rockybul Hussain has told the Assembly that an expert committee has been constituted to look into the feasibility of dehorning the rhinos. "Many African nations have adopted this measure to stop poaching and they are quite successful in their endeavour," he claimed.

Mumbai's Shiv Sena MLA Ravindra Waikar and local corporator Jitendra Walvi have filed a PIL in the Bombay High Court seeking “complete removal” of leopards from Aarey Colony. “The lives of the tribals (1800 families) residing in Aarey Colony are affected because of the fear of attacks by leopards,” the PIL said.

Indeed, chopping off horns to save rhinos is not a new idea. Namibia was the first country to dehorn its rhinos in 1989. But it also invested heavily in anti-poaching infrastructure during the 1990s. In the absence of effective security, dehorning alone does not help. In Zimbabwe's Hwange National Park, for example, most of the dehorned rhinos were killed within 12-18 months of dehorning in the early 1990s.

Dehorning has not worked in South Africa either, where 350 rhinos were poached in 2013 alone. The Kenyan Wildlife Service took a stand against dehorning and lost 37 rhinos in 2013. Zimbabwe kept faith and lost six newly dehorned rhinos during January-August 2011 in the Save Valley Conservancy.

The problem is manifold. First, one cannot remove the whole horn without mutilating the rhino like poachers do. After veterinarians saw off the horn, the stump remains rooted deep inside the tissue and is enough to lure poachers.

Secondly, like nail, horns grow back, making dehorning necessary every 3-4 years. Huge expenses apart, it requires frequent sedation of rhinos. Unfortunately, one in every 20 immobilisation attempts kills a rhino. Thirdly, the horn serves key biological purposes, from selection of mate for breeding to defending calves against predators. Altogether, absence of the horn does not make the survival odds significantly higher compared to the threats of poaching.

Then there is the issue of the chopped horns, valued in gold in the international market. While backing the minister's plan, the ULFA (yes, it has a say in pretty much everything in Assam) has cautioned that the sawn-off horns must be photographed and indexed properly for transparency.

In fact, having surrendered so abjectly before the poachers, the cash-strapped Assam government may consider 'sustainable commercial harvesting' of horns and trade the future stockpile for its great forex potential. For now though, there is a global ban on trade in place. African countries started dehorning rhinos in the 1990s but it has not deterred poachers. Photo courtesy WWF/J Benn

While Assam plots a loss of face, Maharashtra is suffering from a loss of reason. In Mumbai, the forest department undermines the victims of man-leopard conflict in Mumbai as encroachers. People settle down in tens of thousands on the margins of a national park. Experts theorise on lofty models of harmony. Civil society groups peddle tokenism as solutions. And now, the politicians want to cleanse Aarey Colony of leopards.

It is possible to trap and shift every leopard sighted in Aarey Colony. Only it will be a never-ending exercise. The leopards of Aarey are part of the population that lives in Sanjay Gandhi National Park (SGNP) and will keep showing up, unless all leopards are removed from SGNP itself. That too may not solve the problem as leopards are known to move into SGNP from other parts of the state.

If nothing short of extermination will free the Aarey colony of leopards, how can the residents escape conflict?

The forested stretches around the settlements should be avoided, especially by children who often take short-cuts through bushland because the BMC dragged its feet over launching a bus service to the nearest school 5 km away. It is unclear why the forest department or NGOs failed to move the city transport department for over a year or run a school bus themselves.

The area should be cleared of garbage piles that attract feral dogs and pigs that in turn draw leopards. More toilets should be installed so that residents do not have to squat in the open and be mistaken by leopards for prey animals. Mumbai's many civil society groups take pride in garbage collection drives or awareness campaigns but have so far failed to tap into government or voluntary schemes to offer any permanent solution to either.