Overall 672 candidates are in the fray from the 70 Assembly constituencies that are up for grabs in the Delhi Assembly Election 2020. The electoral battle has emerged into a triangular contest between the ruling Aam Aadmi Party (AAP), the Bharatiya Janata Party, which rules at the Centre, and the Indian National Congress (INC), which governed Delhi for three consecutive terms before AAP surfaced in Delhi politics.All the 70 seats in the Delhi Assembly will go to polls on 8 February (Saturday) and the results will be announced on 11 February (Tuesday). AAP is contesting on all 70 seats, whereas Congress and BJP have left four and three seats, respectively, for their allies. While BJP and Congress have relied on a mix of old and new faces, predominantly trusting even their unsuccessful candidates from 2015 polls, AAP has dropped as many as 15 sitting MLAs based on their performance, and also to accommodate heavyweights who could not secure a Lok Sabha seat in the 2019 general elections. Key faces among the AAP's list include Atishi, Dilip Pandey and Raghav Chadha, who unsuccessfully contested the Lok Sabha polls, apart from sitting ministers Satyendar Jain, Manish Sisodia and Gopal Rai. The party has also reposed its faith in Amanatullah Khan to win from Okhla Assembly constituency, which is at the centre of the BJP's ire against the anti-CAA Shaheen Bagh protest. Meanwhile, Chief Minister Arvind Kejriwal will contest from the traditional seat , New Delhi, being represented by chief ministers since the past two decades. BJP key candidates include controversial faces like former AAP MLA Kapil Mishra and party firebrand Tajinder Pal Singh Bagga. Also, in the fray is the Leader of Opposition in the outgoing Assembly, Vijender Gupta, who will contest from the BJP stronghold of Rohini. Congress' key faces include Arvinder Singh Lovely and former AAP MLA Alka Lamba. In the 2015 assembly election, AAP had stormed to power by winning 67 seats in the 70-member Delhi Assembly. The BJP had won three seats while Congress drew a blank in the last Assembly election. 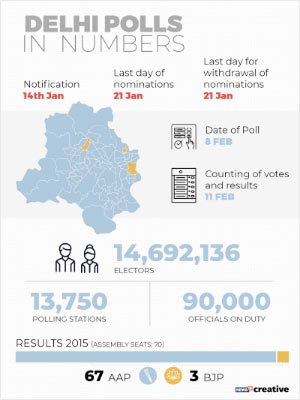 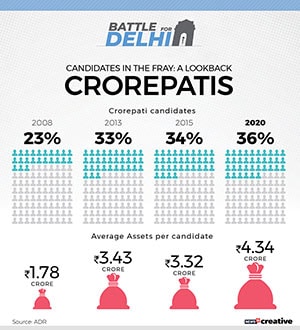